This is a method of supplementing the body’s nutritional needs directly through an intravenous drip, rather than through food or supplements.
The administered ingredients circulate through the body immediately, and the effects can be felt immediately.
A variety of effects can be expected depending on the contents of the infusion. 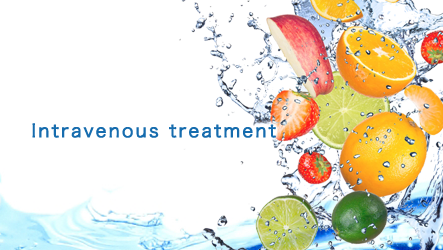 This is a method of supplementing the body’s nutritional needs directly through an intravenous drip, rather than through food or supplements.
The administered ingredients circulate through the body immediately, and the effects can be felt immediately.
A variety of effects can be expected depending on the contents of the infusion.

Recent studies in the US, Canada and Japan have shown that highly concentrated intravenous vitamin C therapy improves symptoms such as pain, fatigue, loss of appetite, and insomnia in cancer patients, and maintains their quality of life.
There are also reports of cases of stopping the progression of cancer and shrinking tumors when used alone or in combination with other treatments. Moreover, highly concentrated intravenous vitamin C therapy has almost no painful side effects like chemotherapy. 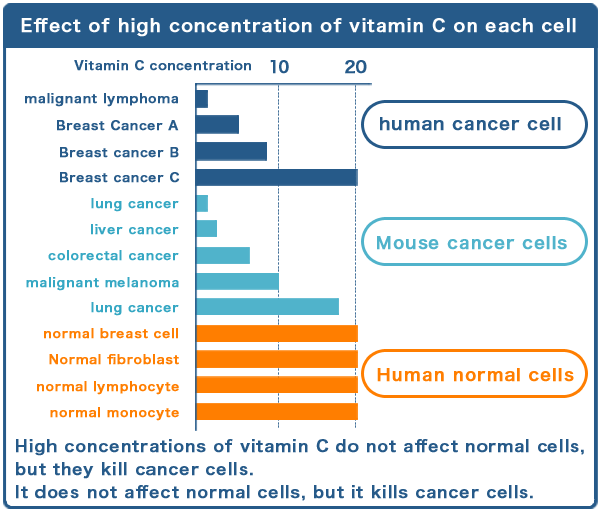 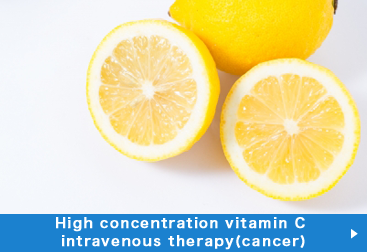 It is a new cancer treatment that kills only cancer cells without affecting normal cells.
Unlike anticancer drugs, it has no side effects such as nausea, vomiting, or hair loss.

High-concentration vitamin C infusion therapy is also effective for beauty, it is now being used as a state-of-the-art in anti-aging treatment.
Anti-oxidation prevents the body from damage and is essential to stay young and healthy.
Vitamin C protects cells from reactive oxygen species, which damage cells, and prevents the body from oxidizing.
In addition, vitamin C inhibits melanin synthesis, which is the source of blemishes, promotes collagen synthesis, which is the source of skin tone and elasticity, and enhances immunity.
Unlike oral intake, a large amount of vitamin C is delivered to the body evenly and directly, making it effective in anti-aging and immune enhancement. 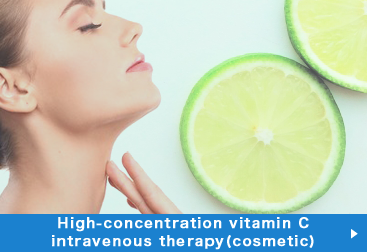 This is the most advanced anti-aging treatment with high antioxidant effect. It can be used to immediately address symptoms such as beautiful skin, whitening, and recovery from fatigue.

A treatment method in which nutrients such as vitamins and minerals required by the human body are directly injected through blood vessels. Since the nutrients are injected directly into the veins, they are absorbed into the body more quickly than supplements, and higher effects can be expected.
Generally, vitamin Bs, vitamin C, magnesium, and calcium are added to the infusion.
It is said to be effective for various diseases such as bronchial asthma, migraine, fibromyalgia, allergic diseases such as allergic rhinitis, general malaise, and chronic fatigue syndrome. 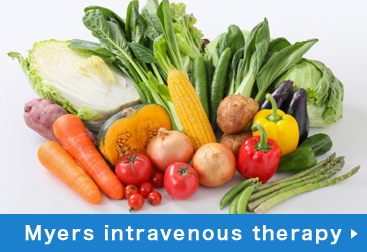 An intravenous drip with a balanced cocktail of vitamins and minerals can enhance the body’s natural healing ability. 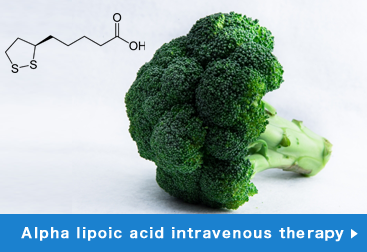 It increases the production of heat energy and promotes metabolism, leading to a slimmer body.

This treatment involves the intravenous administration of human-derived mesenchymal stem cells from fat, dental pulp, umbilical cord blood, etc. The supernatant fluid (culture supernatant) is obtained by culturing the stem cells in a serum-free medium.
The supernatant portion is collected for use and the stem cells are excluded.
The stem cells in culture release hundreds of bioactive substances. These substances play an important role in restoring the function of damaged tissues and cells in the body. By delivering these substances to the body through an intravenous drip, it is expected to activate the regeneration of cellular tissues throughout the body. 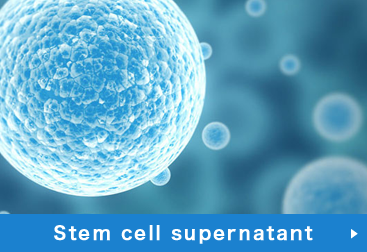 The supernatant fluid generated from the cultivation of human stem cells is administered intravenously. It contains many biologically active substances and has a variety of therapeutic effects.

Placenta extract is the active ingredient extracted from the placenta.
Placenta has been shown to be effective in treating various diseases such as hepatitis, atopic dermatitis, neuralgia, rheumatism and other pain relief, and is also attracting attention in the anti-aging field.
The highly concentrated placenta infusion contains 560 times more active ingredients than regular placenta injections.
It has an amazing rejuvenating effect due to its sustained and immediate antioxidant effect.
The whole body is nourished and the growth factors in the placenta revive the cells and recharge them with energy. 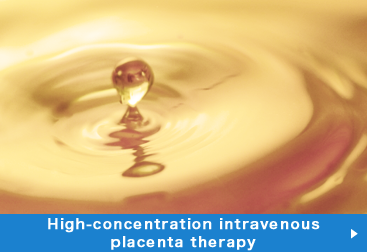 It is expected to have an amazing rejuvenating effect due to its fast-acting and long-lasting antioxidant properties.

Glutathione increases pheomelanin, which whitens the skin, and suppresses the production and fixation of eumelanin, the cause of spots, dullness and pigmentation.
Due to its excellent antioxidant properties, it is effective not only in whitening and anti-aging, but also in relieving fatigue, detoxifying, improving hangovers, and improving liver function.

In addition, when use in combination with highly concentrated vitamin C drip, the synergistic effect of the whitening effect makes it easier to feel the change.
In addition to the intravenous drip, we also offer a detox injection of glutathione. 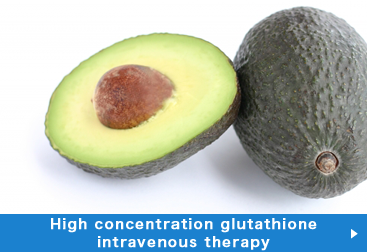 Leads to the whitest skin in your history.
Contains 2000mg of glutathione.

NMN is officially called nicotinamide mononucleotide. It is a vitamin-like substance that is naturally produced in the body, but as we age, our body produces lesser amount of it.
When the amount of NMN is low in the body, aging begins and physical and cognitive functions begin to deteriorate.
The rejuvenating ingredient, NMN, is absorbed into the body and then delivered to every corner of the body where it is converted into a substance called NAD+.
NAD+ is present in the bodies of all living things and affects the maintenance of youth and health, by the time we reach our 40s, the amount of NAD+ decreases to half of the peak level, causing us to lose our youthfulness.
Therefore, the most effective way to increase the concentration of NAD+ in the body is to supplement NMN, the raw precursor of NAD+ 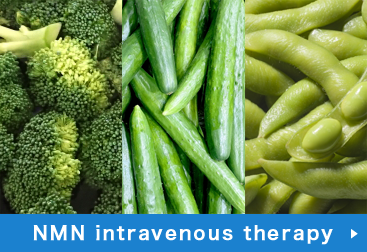 Back-aging therapy that activates the sirtuin gene and returns you to your younger self.

In ozone therapy, about 100ml of blood is taken and injected with ozone, and the purified blood is returned to the body like an intravenous drip.
Aging and age-related diseases, including cancer, are mainly caused by a decrease in oxygen utilization.
Decreased oxygen utilization can occur both locally and systemically.
Oxygen is an important source of nutrition, but it is more important to use it efficiently than to take it in.
Ninety percent of the oxygen taken into the body through respiration is used by the mitochondria.
The most important function of mitochondria is to use that oxygen to produce energy (ATP) for growth and survival.

Ozone therapy activates the mitochondria of the cells and increases the oxygen utilization rate, thus enhancing the natural healing power. It enhances the antioxidant power and brings out the natural healing power of the body, which is good for the whole body, such as improving autoimmunity, improving blood circulation, and activating cells.
As a result, it is said to be remarkably effective in improving arteriosclerotic diseases such as cerebrovascular disease, ischemic heart disease, arteriosclerosis obliterans, and diabetic nephropathy, as well as cancer, rheumatoid arthritis, age-related macular degeneration, inflammatory diseases, viral diseases such as hepatitis, and bacterial infections. 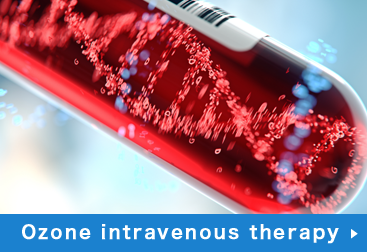 Cleanses the body with smooth blood.

Pain at or around the puncture site

・It is seen in a relatively large number of people. It is related to osmotic pressure, the speed of the infusion, and the condition of the blood vessels.
Other possible causes include IV leakage, infection at the puncture site, and internal bleeding due to the act of IV or injection.

・It depends on the speed of the infusion and the general condition of the patient.

・It is recommended that you receive the infusion on a non-fasting stomach, as it can cause hypoglycemia (dizziness, cold sweats, palpitations, etc.).